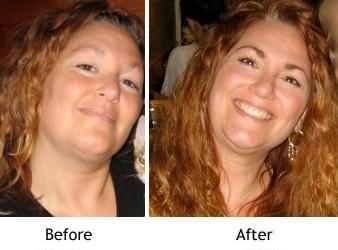 I cannot express how much LiLash and LiBrow have worked for me. After using the products for a little over a year, I look like I aged 20 years in reverse!

My eyelashes are so lush no one can believe that they are not enhanced by some other way meaning that they are all mine! And when I use mascara, I just put on the thinnest coat and it looks like I spent house on them. Here's a picture of me taken around Christmas time after I went to a Lady Gaga show.

I had my makeup on for over 8 hours and I sweated, danced, cried, wore contacts, used eyedrops (since we were in the third row we were hit by waves and waves of smoke from fog machines) and did everything that you aren't supposed to be able to do with mascara on and still have it look great. And I never re-touched my makeup that whole evening.

I don't have photo shop, but I did crop in on the shot of the mascara. All pictures are completely un-retouched. In the shot of my eyes after the Gaga show, I am wearing makeup on my brows mainly because the foundation I use covers the hair up too much. But I am not wearing any makeup in either of the other shots.

I don't like the brush that comes with LiLash. It's just too small. So what I ended up doing was after my 1st tube of LiBrow was done I just switched the brush and started to use that on my lashes. So, maybe I am ending up using more product on my lashes, but I don't care. The results have just been SO extraordinary.

I use the wand like mascara because it's usually a bit thicker on the shaft than what's at the tip of the brush and then I apply a thin stripe of the product on both lash lines (top and bottom). I use it once a day right before bedtime on clean face. And if I don't wash my face right before bedtime, I wet one half of a Q-Tip and scrub with the wet end on my brows and lashes and use the dry end to dry, then apply the LiBrow to everything.

So I now wipe my lashes with the stick (even though it says on the directions not to use it on the actual hair but I do and I have had the best results out of anyone I know who is using the product) and I even use the brow brush on my lashes as well as the lash line. I used to use it every day but now I just use it about every other day except on two tiny area where I used to be completely bald. (the part of my eyebrows closest to my nose). Until that grows all the way in I use it every night there and sometimes twice a day.

I am going to be 50 years old in November and I haven't ever really had eyebrows before and my lashes look like they did when I was a toddler. They are just amazing. I love Cosmetic Alchemy products.

And the only side effect I have ever had is that if I accidentally flick some in my eye it stings for a moment. And I have heard HORROR stories about stuff that Brooke Shields sells I don't remember the name, but there was an article about it in the Sunday paper showing a 25 year old's eye were just ruined. The skin around her eyes is dark purple and all her lashes fell out. What a nightmare.

My husband also had no eyebrows and he has been using LiBrow and now he has beautiful brows. We used to joke that one of the reasons we didn't want to have kinds is because they wouldn't have any eyebrows now we are just too old! (and that was decades before Li-anything was invented)

RapidLash VS Latisse: Which One Wins?
Latisse Before And After Photos in 16 weeks