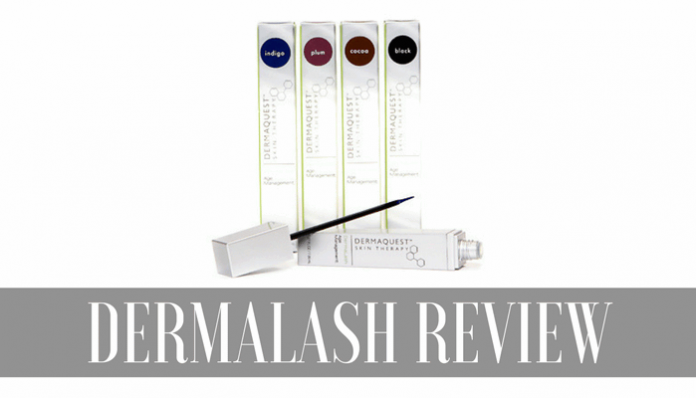 With an impressive backer, the product promises to protect lashes from day-to-day cosmetic abuse, allergies, and environmental damages that lead to breakage and splitting while promoting stronger and voluminous lashes. It is used as an eyeliner along the upper lash line once a day. The manufacturers recommend an additional application of their product DermaLash formula to augment the effectiveness of DermaLash. DermaLash promises to take noticeable effect within 3 to 6 weeks of regular once-a-day application.

DermaQuest unfortunately does not list the ingredients of DermaLash on their site but some of the third party sites mention ingredients such as wheat and soy protein, various glycols, extracts, biotin, and the mysterious eyelashes growth promoter complex.

The ingredients include Peptide complex and anageline, which is responsible for boosting vascular density of the hair follicle and supplying more oxygen within the hair bulb thereby rejuvenating and replenishing the lashes. The list of ingredients as mentioned in the online retailer sales site is Tussilago farfar (coltsfoot) flower extract, which is a popular expectorant promoting hair growth, achillea millefolium extract (yarrow), cinchona succirubra bark extract, which is used by Europeans as a hair loss remedy, alcohol denat, milk protein lactose, sodium citrate, citric acid, and PEG-40 hydrogenated castor oil among others. Apigenin, another ingredient stimulates the blood vessels thereby effecting hair growth. As you can see, most of the ingredients are plant extracts.

DermaQuest is a leading name in the world of beauty products. Although its product DermaLash enjoys a certain level of security in the name of its creator, lack of clinical studies and research reports by independent third party researchers to corroborate their tall claims and insufficient data on the ingredients and their role in the efficacy and the safety of the product makes it hard for the customer to purchase this product with good faith alone.

Rodan and Fields Lash Boost Review in 2020. Is It Really Safe?

LashFood Reviews. Does This Thing Really Work in 2020?

Bioluma Eyelash Growth Serum – a recognized name. But is it worth your money?

My fellow friends and I are cosmetic “freaks” who understand what the chemicals used in products really do, how they are tested, and what all the advertising means. We hand-pick and analyze eyelash growth products to the point of obsession.