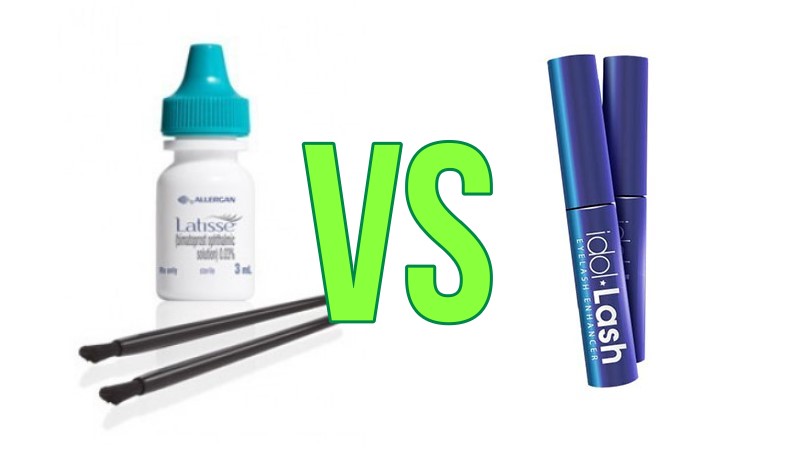 Latisse vs Idol Lash: a real story of the hard choice

Here is a little story that we received from Page about facing the problem of choice when it comes to eyelash growth products. We are keeping in touch with Page and getting ready to update this post on the 2nd week of january 2017, so stay tuned.

I’m posting in part to make sure these reviews are real and not sponsored by Idol Lash. I’ve had extensions for about two years, but I’ve grown tired of the expense and time. Plus, they get kind of ridiculous looking and battered at a point in the cycle, and I’m often too busy to get in soon enough to fix them. They irritate my eyes, and my natural lashes are shorter.

Still, I don’t like short lashes or mascara. Mascara is such a mess. It’s not that great, and it gets underneath my eyes. It doesn’t hold in the pool, and it’s a pain to take off.

So my esthetician said that Latisse really is not going to turn my eyes brown, and I decided to take the plunge. It’s actually cheaper than maintaining extensions. It’s less of a hassle, and I don’t have to worry about the pool, etc.

I came here wondering how long before it took effect, and, now, I feel disheartened. I do think I’ve been getting irritation and redness after just four weeks. I don’t want dark spots, brown eyes, crazy lashes, or patchy lashes.

Still, even after reading the reviews, I was not fully convinced. After all, there are some positive reviews here, and they seem to indicate that following all of the various instructions can forestall a lot of problems. And of course, it’s the disgruntled people who are more likely to complain. Plus, what else would I do.

So I investigated some more. First, I started with alternatives. I read the IdolLash reviews here. They were so positive that I started wondering whether IdolLash sponsored those reviews. So I investigated more and found more positive IdolLash reviews elsewhere. Supposedly, it’s all natural and does not irritate or discolor the lids or eyes. Supposedly, it actually does work too. They have done clinical trials.

I went to the Idol Lash site, and, apparently, there really are clinical trials. They do not mention much in the way of side-effects, which I am pretty sure that they are required to do, but perhaps not since it is a cosmetic product rather than a medical product.

Then, I went to the Latisse site. I have read Latisse reviews before on a cosmetic surgeon site. The docs all downplay the side effects and say that it’s just a small number, etc. But. . . I kind of think that a lot of these cosmetic docs are quackish. Most of what they do has side effects, and they don’t make money on people who don’t use their products. (Don’t get me started on my own problems with Botox and my stance on breast implants after having a related surgery from cancer, getting to know a lot of reconstructed cancer survivors, talking with my physical therapist, and rehabbing survivors as a Pilates Instructor.) In any case, regarding Latisse, how can they ignore all of the complaints?

So I have made a decision. I am switching to Idol Lash.

We’ll see if this review shows up. In the meantime, I have a cheap lash strip that I bought at Ulta. I’ll try Idol Lash, and use the lash strip, which is actually kind of pretty, natural looking, and not so hard to apply once you get the hang of it. If Idol Lash does not work or causes me problems, I’ll probably go back to the lash strip and/or extensions and wait to see whether Latisse gets pulled from the market or sued by you all in a class action.

I do think those of you interested in a class action should talk to a reputable malpractice lawyer to see whether you have a good claim. It’s only fair, and you will be acting as watch dogs for the public.

Good luck and blessings to you all.

Latisse Reviews: Side Effects, Benefits, Risks, and More
Side effects of Latisse with 5 stories from real users
Latisse vs Lilash: Pros and Cons of each eyelash stimulator
RapidLash VS Latisse: Which One Wins?
Latisse Before And After Photos in 16 weeks